New technology is changing every aspect of our life at a rapid rate. In the retail industry, in particular, the latest tech is altering our shopping experiences, covering everything from self-service tills to virtual changing rooms.

The burning question is whether the latest advances are worth the extra costs – which are ultimately passed on to the consumer. High street stores are being brought into the 21st century so they can compete with their online counterparts, but the new technology isn’t without its teething problems.

There’s a strange irony to the fact that technology is generally seen to be killing the high street, as the modern phenomenon of online shopping erodes the popularity of traditional bricks-and-mortar stores. Yet the use of technology could turn out to be the high street’s saviour, if used appropriately.

Introduced to speed up the check-out process in supermarkets, self-service tills are useful for customers with just a few items, but they can become a problem for a number of reasons.

First, if customers with a lot of items go through, there’s more chance of something going wrong. The scale on to which the scanned item is deposited is extremely sensitive, so if it doesn’t recognise exactly the weight of the goods, an automated voice utters a phrase that’s the scourge of all shoppers: “Unexpected item in bagging area!”

Not only does it cause frustration and embarrassment for shoppers (as the implication is that you’ve sneaked an item through that you haven’t scanned, even when you have), it also holds queues up, as you must wait until an assistant comes to clear the till.

So many customers complained about the “irritating” and “shouty” tone of the self-scan tills at Tesco that the retailer changed them, banishing the “unexpected item” reminder. The retailer introduced self-scan in 2003 and decided to change the technology on all 12,000 of its tills in 2015, in response to customer complaints.

The supermarket giant invested in upgrading its tills to introduce more customer-friendly phrases after admitting its system had become a “source of frustration” for consumers.

However, the upgrade hasn’t stopped some of the other issues, such as some barcodes not scanning (particularly on reduced items), so they must be input manually.

When certain items such as alcohol (even non-alcoholic beers) and energy drinks require clearance from a member of staff, customers still experience frustration as they wait under the flashing red light of their checkout until someone comes to assist them. They can’t pay until an assistant authorises the purchase, defeating the object of self-scan.

Scan as you shop

Does the latest innovation, scan as you shop, really save you time? It’s increasingly popular in the larger supermarkets, with customers carrying their own individual hand-held scanning device as they walk round the store, scanning each item before they put it in their trolley.

This means they can monitor how much they’re spending on the device, so they know whether they’ve overspent. They can also get confirmation of various deals that have been advertised, so there’s no need to wait until the shopping has been processed at the till.

Some customers have indicated they prefer walking around with their own scanner, “zapping” items, as they believe it speeds up the checkout process.

However, time saved at the checkout is lost during the “scan as you shop” process, as the barcode must still be scanned and processed electronically. The procedure seems faster because you’re not standing still at the checkout, scanning one item after another. Scanning is interspersed by browsing round the aisles.

In addition, some supermarkets operate a “random checks” process, in terms of monitoring customer purchases, as the new system could be open to abuse by shoplifters. This has caused concerns for some genuine shoppers, with consumer reviews voicing dissatisfaction. One shopper complained of having been stopped twice recently, causing the “scan as you shop” process to take longer than a regular shop.

In addition, the scanners are quite basic at present and shoppers are calling for improvements, such as a “search” option. Shoppers are also suggesting that when they use scan and shop and have paid for their items, it would be more convenient if they could simply put the items on a conveyor belt for a member of staff to pack.

Customers completing a large shop find little time is saved at all, as they still have to spend ages packing up all the shopping themselves. Shoppers have suggested that the staff who were deployed on tills that were replaced by scan as you shop could be redeployed in packing the customers’ shopping instead.

Click and collect is becoming a bit of a buzzword in the retail industry – customers like it because it’s free and convenient. They can collect shopping in their own time. However, it has proved to be a headache for retailers in many instances.

Customer services staff often have to chase up orders, while some orders that have already been packed by the warehouse are subsequently cancelled. Another challenge for retailers is dealing with a demand for products that are out of stock.

Customers would arrive at the collection point, only to be told their order was unavailable, causing frustration for the consumer. Despite these issues, click and collect remains popular among customers.

In some ways, click and collect has become a victim of its own success, as the demand is so high that some retailers are having to provide additional storage space for the orders and are also using extra resources on contacting customers to tell them to collect their order.

Other challenges arise for the retailer when customers arriving to pick up their shopping wish to add to their original order, or change their mind. Some customers have asked to see certain products from their order before they take it away. All of this has added to the employees’ tasks and has created unplanned overheads for the retailer.

Although click and collect can be a great customer service boost for consumers, it comes at a cost, as the electronic system required to maintain the service, plus the extra staff needed, add costs that inevitably will be passed on to consumers in price hikes.

Drone delivery is perhaps the most modern innovation when it comes to receiving parcels. It uses an unmanned aerial vehicle (a delivery drone) to transport parcels. The service isn’t yet available in the UK, although in some parts of the United States it has already begun – sometimes pledging to deliver goods within 15 minutes of the order being placed!

If you’re fed up of waiting for the post, or for slow couriers, this modern solution could launch in Britain at some point in 2019, according to industry insiders. Retailers are still figuring out how to best utilise this on-demand solution, with drone delivery reportedly providing a faster, cheaper and more environmentally-friendly option.

Up until recently, regulations stated that drone owners in the UK couldn’t fly an unmanned aerial vehicle beyond their line of sight, effectively preventing the use of drones for parcel deliveries, as the service would breach flying regulations.

However, the National Air Traffic Control Service has announced it’s revoking this rule, so that drone deliveries can become a reality. NATCS’ head of drones, Andy Sage, was reported as saying that the first “out-of-sight” operations for drones will possibly begin in the UK in 2019 or 2020.

Some larger retailers around the world are already taking advantage of virtual changing rooms and smart mirrors. As high street retailers fight stiff competition from online rivals, they are starting to use new and innovative technology to give ecommerce stores a run for their money. Dubbed as “clicks and mortar” shops, tech is used advantageously in a regular bricks and mortar store.

With smart mirrors, customers can look at themselves wearing a number of virtual reality outfits. This avoids the hassle of having to physically get changed, while giving you an idea of how you would actually look in the clothing.

The experience is said to be better than online shopping because consumers are seeing more than just a photo of an outfit on a website, yet it has all the ease of ecommerce.

Although virtual dressing rooms may seem like something from a science fiction film, many savvy retailers across the globe are already trialling the system.

The jury is out on whether businesses are going too far with technology, taking away the personal touch which some customers like. In addition, the future effects on retail jobs is unknown at present, as no-one knows how far tech will advance.

You could say that people are always needed to operate the technology, but jobs will still be affected, with the human face of the retailer being replaced by a touchscreen, even with existing innovations such as self-scan checkouts.

What is Good Customer Service?

How much is the UK £ Worth? 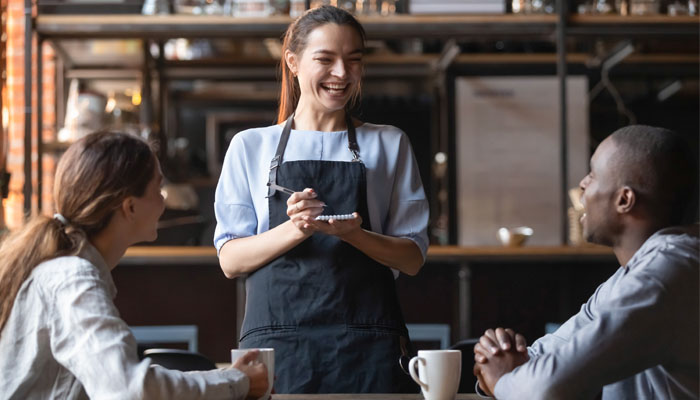 How to Keep Customers Coming Back for More!